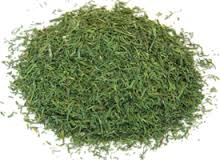 In Russia, Ukraine, and Poland dill is one of the most popular herbs used in the kitchen, and, along with parsley, is used for various purposes. Fresh, finely cut dill leaves are used as topping to various soups, especially the hot red borsht and the cold borsht mixed with curds, kefir, yoghurt, or sour cream, which is served during hot summer weather and is called okroshka. It is also popular in summer to drink fermented milk (curds, kefir, yoghurt, or buttermilk) mixed with finely cut dill (and sometimes other herbs).

In the same way, prepared dill is used as a topping for boiled potatoes covered with fresh butter - especially in summertime when there are the so-called "new," or young, potatoes. The dill leaves can be mixed with butter beforehand, making it a dill butter, which can serve the same purpose. Dill leaves mixed with tvorog form one of the traditional cheese spreads used for sandwiches. Fresh dill leaves are used all year round as an ingredient for making fresh salads, e.g., one made of lettuce, fresh cucumbers and tomatoes, the way basil leaves are used in Italy and Greece.

In Poland, fresh dill leaves mixed with sour cream are the basis for dressings, and it is especially popular to use this kind of sauce with freshly cut cucumbers, which practically are wholly immersed in the sauce, making thus a salad called "mizeria." The dill leaves serve as a basis for cooking dill sauce, used hot for baked fresh water fish and for chicken or turkey breast, or used hot or cold for hard boiled eggs (depending on the temperature of the eggs served).